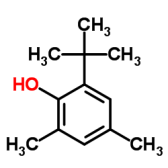 Fuel additives are considered as one of the most important chemical additives. These add-ons include the following:

Antioxidants are used to prevent the oxidation of the base material and its properties, and to keep the oil from deforming and settling with the material, resulting in engine operation. Antioxidants generally include bulk-derived phenols, aromatic diamines, or a mixture of alkyl phenols and aromatic diamines. Fuel oxidation, also called instability, causes fuel degradation, resulting in turbidity, gum formation, and sediment. Antioxidants increase stability and reduce the degradation of gasoline in the tank.

Topanol is a brand name for the chemical 2,4-Dimethyl-6-tert-butylphenol. Due to its molecular structure, this substance consists of a benzene ring consisting of a hydroxyl group, two methyl groups and a triciobutyl group. One of the most important characteristics of topanol is stability in acidic, alkaline and neutral solutions. Topanol is widely used in refineries to make jet fuel, automobile gasoline and aircraft gasoline.

Topanol is used as a main antioxidant. Gum in the fuel is transferred through the fuel system and can lead to inefficiency and system failure. In the fuel system, gum can clog the injection system and form deposits in the inlet valve. Unstable species in gasoline produce free radicals that combine with oxygen to produce more free radicals in the chain reaction. These compounds react with olefins to form gum. Other applications of Topanol A include the following items: