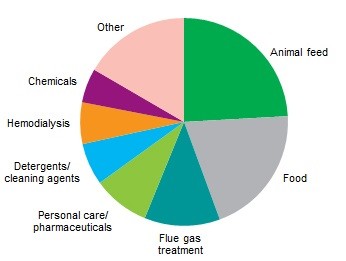 Sodium bicarbonate or baking soda is one of the salts of sodium in combination with carbonic acid, of which only one acidic hydrogen has been replaced by sodium. The molecular formula of sodium bicarbonate is NaHCO3. This substance, which is also known as baking soda in the food grade, is also known in the industry by other names such as sodium hydrogen carbonate, cooked soda, sodium carbonic acid, monosodium salt, monosodium carbonate, and sodium acid carbonate. Sodium bicarbonate in solid form, in the form of granules or crystalline powders, white, odorless, has a base property and is slightly soluble and slightly soluble in ethanol. Bicarbonate absorbs moisture and evaporates.

Figure (1) shows how sodium bicarbonate consumption will be distributed in 2019 in different industries. 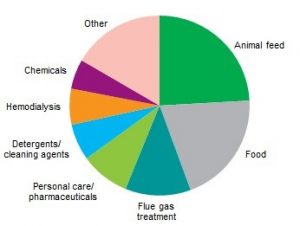 Fig (1): Sodium Bicarbonate consumption will be distributed in 2019 in different industries

It is a very weak base that is soluble in water and is converted to sodium (Na) and bicarbonate (HCO3) ions in water.