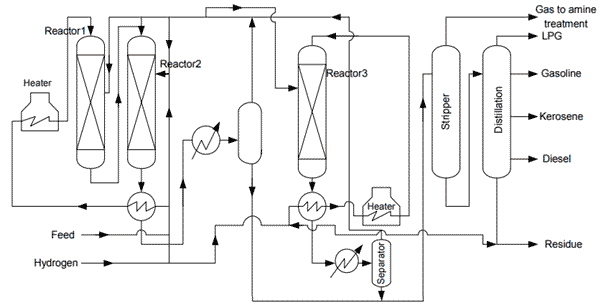 One of the compounds that is produced as a byproduct of some cracking reactions is hydrocarbons compacted polyaromatic, commonly known as coke. These deposits tend to lower the cracking activity of the catalyst and must be periodically removed by burning. Since coke represents a loss of desired products and subsequent regeneration supplies a major part of heat to the process, factors leading to coke formation are of great commercial importance. Coke formation occurs through three different mechanisms:

Coke formation has a number of adverse effects in operational processes, including the following cases:

So, several methods have been presented to overcome the problems caused by the formation of coke during thermal cracking. These methods as follows:

DMDS added in high temperature and then decomposed into carbonyl sulfide, hydrogen sulfide, dimethyl sulphide, methane, and SH radical, and thus the chemical absorption of sulfur at the metal surface creates a layer of metallic sulfide on the surface of the reactor and leads to the effect of this combination will be on the process. DMDS also used in the following reasons to reactors:

In Iranian refineries, DMDS is also used to prevent coke formation during the cracking process and increase rate of cracking reactions. Therefore, supplying DMDS is so necessary and crucial. Rayenehdaran Co. has been consistently trying to play an active role supplying DMDS with access to international recognized resources and manufactures.