What is Methanol | Methanol (1) 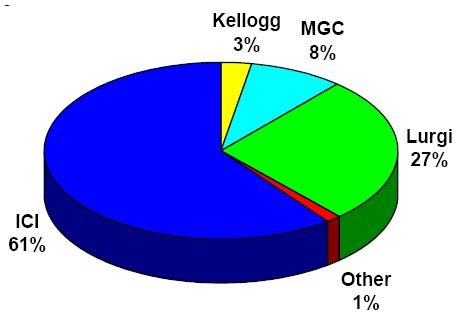 What is Methanol | Methanol (1)

The ancient Egyptians used a mixture containing methanol to mummify, they obtained it from pyrolysis of wood. However, pure methanol was first isolated by Robert Boyle in 1661, whom the researcher named the Spirit of box. Because he used boxwood in its preparation and then it became known as Piroxilic Spirit.

In 1834, the French chemists Jean-Baptiste and Eugene Peligot identified its constituent elements. They also introduced the word methylene into organic chemistry, meaning methu meaning wine and hyle meaning wood, then in 1840 The term methyl was derived from it and was used to describe Methyl Alcohol. The name was abbreviated to Methanol in 1892 by the International Conference on the Naming of Chemicals.

In 1923, the German scientist Mattias Pierr, who worked for BASF, came up with a plan to produce methanol from synthetic gas, which contains a mixture of carbon and hydrogen oxides from coal and is also used to synthesize ammonia. In this process, zinc-cream catalyst was used and in harsh process conditions, methanol was produced at high temperature and pressure. Modern production of methanol is now possible with catalysts that can take advantage of lower temperature conditions.

Methanol is a clear white liquid like water that has a mild odor at normal temperatures. Since its discovery in the late seventeenth century, its consumption has been growing so much that now with an annual production of 12 million metric tons, it is ranked 21st among industrial chemical products.

For many years, formaldehyde, the main consumer of methanol, was produced with the consumption of almost half of methanol, but in the future it will be reduced in importance because of new uses such as acetic acid and MTBE (which is used to improve the octane number of gasoline). It is increasing. On the other hand, the use of methanol as a fuel in special circumstances will be significant.

The first and oldest major method of methanol production was destructive wood distillation, which was practically practiced from the mid-nineteenth to the early twentieth century and is no longer practiced in the United States. This production method was abandoned in the 1920s with the development of the process of synthesizing methanol from hydrogen and carbon oxides. Methanol was also produced as a non-catalytic oxidation product of hydrocarbons. This process has been abandoned since 1973.

Methanol can also be obtained as a by-product of the Fisher-Tropsch process. The modern production of methanol on an industrial scale is based exclusively on its synthesis from a high-pressure mixture of hydrogen, carbon dioxide and carbon monoxide in the presence of a heterogeneous metal catalyst.

Modern industrial-scale methanol production today is exclusively from a high-pressure mixture of hydrogen gases and carbon oxides on a metal catalyst. The pressure of the synthesized gas depends on the activity of the catalyst used. Today, four types of processes are mainly used in the world to produce methanol, and Figure (1) shows how the use of these processes is distributed.