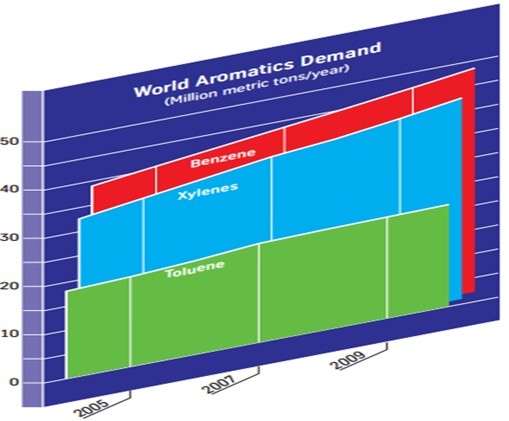 Toluene (methylbenzene or phenylmethane) is a colorless, water-insoluble liquid with an odor similar to that of ordinary paint thinners. Toluene is one of the aromatic compounds that is used as a raw material as well as a chemical solvent. Other applications include paint solvents, paint thinners, silicone sealants, chemical reagents, plastics, printing inks, adhesives, varnishes and disinfectants.

Toluene has the chemical formula C6H5CH3 and does not react with acid or dilute base. Toluene naturally contains less than 0.01% benzene, while the industrial type may contain up to 25% benzene. Toluene reacts with hydroxyl radicals in the air, oxygen atoms (O), ozone (O3) and peroxy radicals (RO2) in which R is an alkyl or aryl group in the form of oxidation products. Table (1) lists the most important characteristics of toluene.

Demand for aromatic compounds in the chemical industry Figure (1): Demand for aromatic compounds in the world