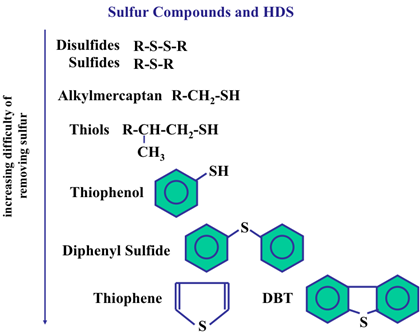 Sulfur is an element commonly found in crude oil and petroleum products. Sulfur is considered an undesirable contaminant because, when burned, it generates sulfur oxides. Consequently, most finished petroleum products have a limit on how much sulfur they can contain, making sulfur removal an important part of the overall refinery process. Sulfur can also harm some of the catalysts used in refining process units so it must be removed from some intermediate streams before they can be fed to a conversion unit.

As a general rule, a crude oil grade with high sulfur content will have a lower value. This type of crude is often referred to as a sour crude. Figure (1) shows the sulfur compound and HDS process for removal them. Most of the sulfur in crude oil is removed during processing. Some of it is removed in conversion processes as hydrocarbon molecules that contain sulfur are cracked and form H2S. Sulfur is also removed directly by processing a hydrocarbon stream through hydrotreating, where the sulfur in the hydrocarbon is replaced with a hydrogen atom, and the released sulfur is combined with two free hydrogens to form H2S gas.
H2S gas is typically collected from the various conversion and hydrotreating units and converted into elemental sulfur in a sulfur plant.

Once separated, sulfur can be sold as a low-value sulfur product, either as solid sulfur or in a molten state.
The major use for sulfur is in the petrochemicals industry to produce sulfuric acid.
In the earth’s crust, sulfur is the 15th most abundant element with a content of about 0.05%. It can be found at high concentrations in fossil fuels such as coal, natural gas, and crude oil.

Crude oil is a mixture of mainly organic compounds with a minor amount of inorganic species and can contain from 0.04 up to 5% sulfur, generally found in the form of thiols, sulfides, disulfides, thiophene, dibenzothiophene and alkyl derivatives of these molecules.

Sulfur is contained as a biologically active element in various amino acids, co-enzymes, and vitamins, and thus is considered to be essential to plant, human, and animal life. However, some sulfur compounds have toxic effects. Upon combustion of sulfur, compounds, such as SO2 are produced and their emission into the atmosphere causes acid rain, respiratory diseases and ozone layer depletion. To protect the environment, the percentage of sulfur in fuels has been significantly decreased in recent years.