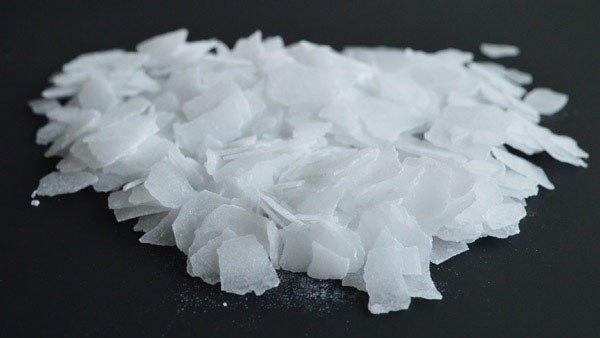 At room temperature, pure sodium hydroxide (NaOH) is a white, odorless solid. Sodium hydroxide is an alkaline corrosive. It reacts with moisture from the air and may generate heat as it dissolves. This heat can cause a fire if it is near flammable materials.

Sodium hydroxide (caustic soda) is a co-product from the manufacture of chlorine using a solution of the readily available raw material, rock salt (sodium chloride). These factors contribute to it being the cheapest and most widely used strong alkali.

Over 90% of all industrial chlorine is produced by electrolysis, a process in which an electric current is passed through a brine solution. An important byproduct of this process is sodium hydroxide. Two plates, or electrodes, are inserted into a brine solution and connected to a DC power supply. The electrode connected to the negative terminal is called the cathode and the electrode connected to the positive terminal is called the anode. When the current passes, chlorine gas is liberated at the anode, hydrogen gas is liberated at the cathode and the electrolyte is gradually converted from sodium chloride to sodium hydroxide. The net result of the reaction can be written as:

All of the products of this reaction are marketable and so should be as pure as possible – hence one reason for the initial purification of the brine.

Another major use of sodium hydroxide is in the manufacture of paper from wood. In the most used process, the Kraft process, wood is treated with a solution containing a mixture of sodium sulfide and sodium hydroxide. Most of the unwanted material in the wood, such as the lignins, dissolve in the liquor, leaving relatively pure cellulose which is filtered off. It is this cellulose which is purified further that forms the basis of paper.

Sodium Hydroxide is also used quite a bit in food processing.  The compound is often used in steps for peeling fruits and vegetables, processing cocoa and chocolate, thickening of ice cream, poultry scalding and soda processing.  Other uses include:

Figure (1) shows the use of sodium hydroxide in different industrials.