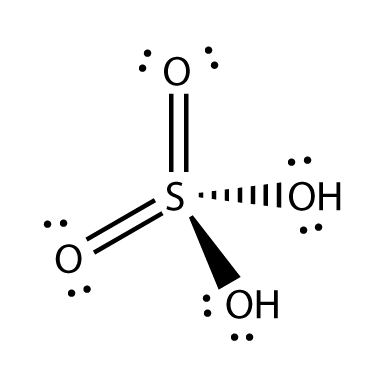 Sulfuric acid was first discovered by Jabben Hayan. He obtained this acid by distilling minerals from iron sulfate and copper (II) sulfate. Sulfuric acid is a very strong, inorganic acid naturally occurring in volatile gases. Sulfuric acid is a colorless oily liquid. It is soluble in water with release of heat. It is corrosive to metals and tissue. It will char wood and most other organic matter on contact, but is unlikely to cause a fire. Long term exposure to low concentrations or short term exposure to high concentrations can result in adverse health effects from inhalation.

It is used to make fertilizers and other chemicals, in petroleum refining, in iron and steel production, and for many other uses. It has polar molecules that can bind together a hydrogen bond. For this reason, sulfuric acid is a fluid boiling point and viscous liquid. The same molecular conditions make the sulfuric acid well dissolved in water and produce different acid solutions. Figure (1) represents a simple process of production of sulfuric acid. Figure 2 also shows the process of Non Ferrous Ores as one of the most common processes of sulfuric acid production.

Figure (1): A simple schematic of the overall process of producing sulfuric acid