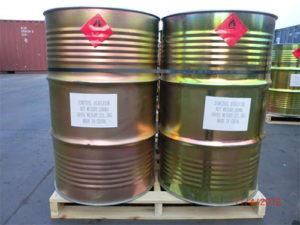 Dimethyl Disulfide (DMDS) is the most commonly used chemical for sulfiding hydrotreating and hydrocracking catalysts. These hydroprocessing catalysts contain metal oxides that must be converted to the active metal sulfide before they will promote desulfurization and denitrification reactions on hydrocarbon feeds.

The activation process, often called presulfiding, begins with the introduction of DMDS into a reactor pressurized with hydrogen at a temperature of 370F or higher.  Under these conditions and when exposed to a hydrotreating catalyst, DMDS rapidly decomposes, forming the H2S required to convert the oxides to metal sulfides. Note that if no catalyst is present, thermal decomposition of DMDS to H2S will not occur until the temperature exceeds 1000°F.

DMDS is also used to passivate furnace tubes in ethylene crackers, although Dimethyl Sulfide (DMS) is used more often for this application.

DMDS is ideal for sulfiding because of its high sulfur content (68%) and its decomposition temperature range of 360-460F.  At this temperature level, it is much easier to control the reaction exotherm that occurs as metal oxides are transformed to their corresponding sulfide form.

Note that the DMDS decomposition temperature over a hydrotreating catalyst is dependent on pressure, residence time, and catalyst type.  For example, Co-Mo catalysts will decompose DMDS at a lower temperature than Ni-Mo catalysts.

An additional advantage of DMDS is the by-product of its decomposition, simple methane (CH4), will not cause premature coking of the catalyst bed.  Other spiking agents, such as polysulfides (TBPS), can cause excessive coking during the sulfiding process due to their decomposition by-products. As mention in last part, Dimethyl Disulfide (DMDS) is a sulfiding agent in refineries and petrochemicals, which is used along with a reducing agent such as hydrogen, to transform metal oxide species to a metallic sulfide crystalline phase in situ for hydrotreating catalysts.

For in situ sulfiding, the reaction is performed inside the process unit for complete control and to achieve maximum catalyst activity and safe handling. DMDS can also be used as a passivation agent to reduce the layer of coke that forms within furnaces and improve the run length, yield and life of furnaces. Figure (1) shows the typical feed Sulfiding Procedure and figure (2) shows decomposition of DMDS in the Presence of a Catalyst, respectively. This note must be mentioned that actual result may very depending on unit condition and unit. Fig (2):  Decomposition of DMDS in the Presence of a Catalyst