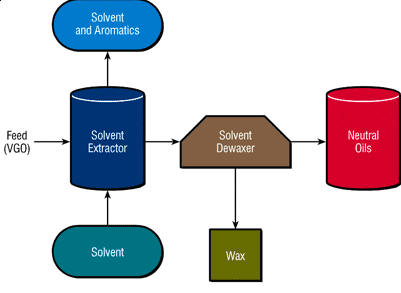 In refining the base oil using acid, chemical reactions are used to reduce the aromatic components and eliminate the reactive components, reducing the useful life of the oil, but in the extraction method, physico-chemical separation is performed using a solvent. In this way, with the help of extraction method, most of the aromatic compounds in the oil are extracted using a solvent, and after the solvent is recycled, it is extracted from the unit.

The product of this stage, which is sent to the next stages for further refining, is called refinite. Rafinite has a higher resistance to heat and oxidation and its viscosity index is higher than the input feed to the solvent extraction unit. In particular, the selectivity for multi-ring aromatic compounds with three or more rings has special attention due to the carcinogenicity of these compounds. Figure (1) shows the oil production process using the solvent extraction method. In general, the solvent extraction process is only able to produce low quality final base oils and the properties of the produced oil are highly dependent on the type of feed of this unit. The choice of solvent used in this method depends on the following factors: