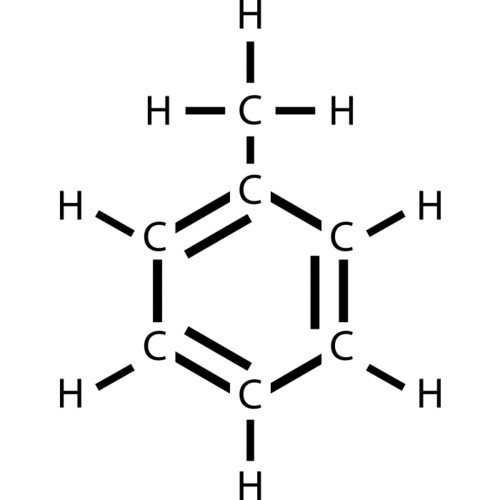 Toluene is also known as toluol, phenylmethane, methylbenzol, methylbenzene, monomethyl benzene, and methacide. Some relevant physical and chemical properties of toluene are listed below:

At room temperature, toluene is a clear-to-amber colorless liquid with a pungent, benzene-like odor. Although it is a liquid at room temperature, toluene’s low vapor pressure results in extensive volatilization. It is flammable with a flash point of 4.4 o C. Toluene is strongly reactive with a number of chemical classes, particularly nitrogen-containing compounds, and may react with some plastics.

Uses The major use of toluene is as a mixture added to gasoline to improve octane ratings. Toluene is also used to produce benzene and as a solvent in paints, coatings, synthetic fragrances, adhesives, inks, and cleaning agents.

Toluene is also used in the production of polymers used to make nylon, plastic soda bottles, and polyurethanes and for pharmaceuticals, dyes, cosmetic nail products, and the synthesis of organic chemicals. Figure (2) shows the world consumption for toluene in 2018. Sources and Potential Exposure The highest concentrations of toluene usually occur in indoor air from the use of common household products (paints, paint thinners, adhesives, synthetic fragrances and nail polish) and cigarette smoke. The deliberate inhalation of paint or glue may result in high levels of exposure to toluene, as well as to other chemicals, in solvent abusers.

Toluene exposure may also occur in the workplace, especially in occupations such as printing or painting, where toluene is frequently used as a solvent. Automobile emissions are the principal source of toluene to the ambient air. Toluene may also be released to the ambient air during the production, use, and disposal of industrial and consumer products that contain toluene. Levels of toluene measured in rural, urban, and indoor air averaged 1.3, 10.8, and 31.5 micrograms per cubic meter (µg/m ), respectively.