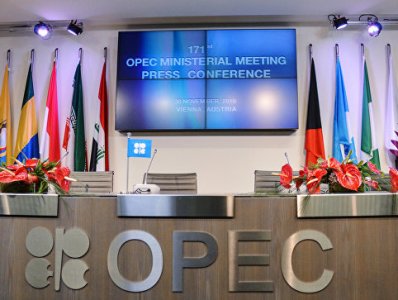 was held in Vienna, Austria, on Wednesday, 30th November 2016, under the Chairmanship of its President, HE Dr. Mohammed Bin Saleh Al-Sada, Minister of Energy and Industry of the State of Qatar and Head of its Delegation.

The Conference welcomed HE Ignasius Jonan, Indonesia’s Minister of Energy and Mineral Resources, who was attending a meeting of the OPEC Conference for the first time.  The Conference extended its appreciation to the work of his predecessor in office, HE Sudirman Said, who oversaw Indonesia’s reactivation of its OPEC Membership at the end of last year.

Furthermore, the Conference welcomed a number of Ministers to a Vienna OPEC Conference for the first time.  HE Noureddine Boutarfa, Algeria’s Minister of Energy; HE Etienne Dieudonné Ngoubou, Gabon’s Minister of Petroleum and Hydrocarbons; HE Jabbar Ali Hussein Al-Luiebi, Iraq’s Minister of Oil; and HE Dr. Guillaume Long, Ecuador’s Minister of Foreign Affairs, who was heading his country’s delegation at this Meeting.

The Conference studied the Secretary General’s report, the report and recommendations made by the High-Level Committee that was set up following the ‘Algiers Accord’ that was agreed at the 170th (Extraordinary) Meeting of the OPEC Conference on September 28 in Algeria, the report of the Economic Commission Board, OPEC’s Long-Term Strategy (LTS) document, as well as various administrative matters.

The Conference took note of oil market developments since it last met in Algeria and reviewed the oil market outlook for the remainder of 2016 and 2017.  It observed that global economic growth forecasts were reasonable for both 2016 and 2017, at 2.9% and 3.1% respectively, that non-OPEC supply is expected to contract by 0.8 million barrels per day (mb/d) in 2016, before returning to growth of 0.3 mb/d in 2017, and that world oil demand is anticipated to grow at healthy levels of around 1.2 mb/d in both 2016 and 2017.

The numbers underscore that the market rebalancing is underway, but the Conference stressed that OECD and non-OECD inventories still stand well above the five-year average.  The Conference said it was vital that stock levels were drawn down to normal levels.  The Conference also noted the drop off in investment levels in both 2015 and 2016, as well as the huge layoffs the industry has witnessed in recent years.  It emphasized the importance of continued investments for an industry that needs regular and predictable investments to provide the necessary supply in the medium- and longer-terms.

The Conference recorded its deep appreciation to the commitment and valued contribution of the High-level Committee on the implementation of the ‘Algiers Accord’.  The Committee’s efforts helped form a consensus among Member Countries on the basis of a proposal put forward by Algeria to implement a new range of targeted production levels.

Accordingly, and in line with the ‘Algiers Accord’, the Conference decided to implement a new OPEC-14 production target of 32.5mb/d, in order to accelerate the ongoing drawdown of the stock overhang and bring the oil market rebalancing forward.  The Agreement will be effective from January 1, 2017.  The Conference also decided to establish a High-level Monitoring Committee, consisting of Oil Ministers, and assisted by the OPEC Secretariat, to monitor the implementation of the Agreement.  Member Countries, in agreeing to this decision, confirmed their commitment to a stable and balanced oil market, with prices at levels that are suitable for both producers and consumers.

The Conference recorded its deep appreciation to the country of Algeria, HE Noureddine Boutarfa and Eng. Mohamed Hamel, Algeria’s Governor for OPEC, for their outstanding contribution to the implementation of the ‘Algiers Accord’.

The Conference welcomed the recent early enforcement of the ‘Paris Agreement’ on climate change.  It stressed that OPEC will continue to support the successful and comprehensive implementation of the Agreement to ensure a ‘win-win’ outcome for all.  In this regard, it stated that it was important to recognize that the Agreement is under the United Nations Framework Convention on Climate Change and should continue to be guided by its principles and provisions.  In particular, the unique situation of developing countries should be given the top priority it deserves.

The Conference appointed Mr. Estévâo Pedro, Governor for Angola, as Chairman of the Board of Governors for the year 2017, and HE Wilson Pástor Morris, Governor for Ecuador as Alternate Chairman for the same period.

The Conference decided that its next Ordinary Meeting will convene in Vienna, Austria, on Thursday, 25th May 2017.

Finally, the Conference expressed its continued sincere gratitude to the Government and to the people of the Republic of Austria, as well as the authorities of the City of Vienna, for their warm hospitality and excellent arrangements made for the Conference Meeting.