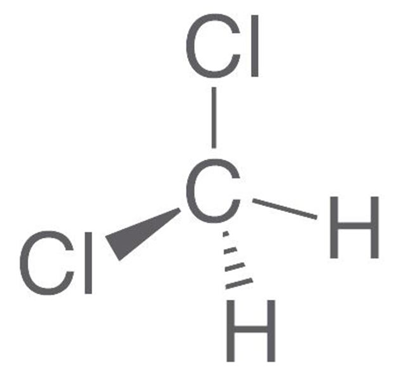 methylene chlorid or Dichloromethane, CH2Cl2 (DCM), also known as methylene chloride, is a halogenated aliphatic hydrocarbon compound. It is a colourless liquid with penetrating ether-like or mild  sweet odour. It is moderately soluble in water (2 g/100 ml at 20 °C) and soluble in most organic solvents such as ethanol, ether, phenols, aldehydes and ketones. Its evaporation rate is 27.5 (reference liquid is butyl acetate = 1).

DCM vapours are heavier than air. DCM is normally stable, non-flammable and non-explosive when mixed with air; temperatures above 100 °C should be avoided. A wide range of odour thresholds (530–2120 mg/m3) have been reported, but detection occurs around 530 mg/m3and recognition around 810 mg/m3. Figure (1) shows the chemical structure of methylene chloride. DCM may be formed from natural sources, but these are not believed to contribute significantly to global release. The worldwide production of DCM in 1980 was estimated to be 570 000 tonnes, of which 270 000 tonnes were produced in western Europe. Current estimates are that world production is at a similar level to that in 1980. Production of paint stripper, pharmaceuticals and process solvent are the most important industrial areas of DCM use.

Other important uses of DCM include foam blowing of polyurethane, metal degreasing, stripping and degreasing in the electronics industry, as a solvent in polycarbonate resin production, in photographic film base manufacturing, and numerous other cleaning and thinning uses. DCM is also occasionally used as an extractant for naturally occurring, heatsensitive substances such as edible fats, caffeine, cocoa, spices and hops.

The most important application of methylene chloride:

Paint Industries: A variety of surfaces are used as solvents to remove colored coatings.

Food industry: Used as an extractive solvent in the food and beverage industry.

Transportation industries: For degreasing, metal surfaces and parts such as aircraft components, railways and equipment should be used. Methylene chloride vapor is also used to remove oil and grease from car transistor parts, diesel engines, aircraft parts and spacecraft parts.

Medical Industries: Used to extract chemicals and drugs such as steroids, antibiotics and vitamins.

Other applications: This material is used in the production of photographic films, synthetic fibers, adhesives, printing inks and printed circuit boards.