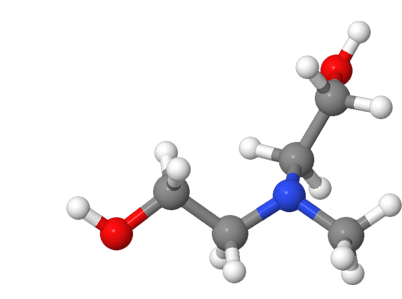 One of the basic processes in natural gas processing is the separation of acid gases or gas sweetening. During this process, hydrogen sulfide and carbon dioxide and other acidic gases such as carbonyl sulfide, mercaptans and carbon sulfide are separated from natural gas.

Many factors are effective in choosing the right process for gas sweetening, the most important of which are:

Figure (1) shows a simple diagram of the gas sweetening process : MDEA has many advantages over other conventional amines, including:

In recent decades, it has been widely used for gas sweetening in the world. But this amine also has an important drawback, and that is the low rate of reaction with carbon dioxide and therefore the low amount of carbon dioxide absorption by this solvent.

To solve this problem and use the benefits of this solvent, in recent years the use of amines based on MDEA, including formulated amines and amino mixtures has been expanded. These amines are added to MDEA, an activator, or an amine of the first or second type. Studies show that about 70% of the world’s liquefied natural gas units that were operational between 2000 and December 2010 have used these amines.