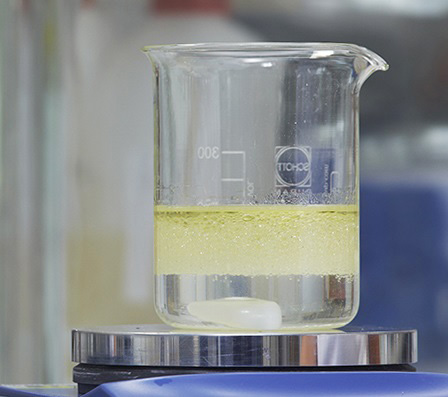 Extraction of crude from underground resources often results in the formation of stable water-in-oil emulsions. High amounts of water, salt, and other solids in crude oil, it is necessary to separate these materials from crude oil, because the presence of these materials makes the crude oil in the operational and export stages, has no necessary parameters for refining and transport, and economically Economic is also not desirable.

Also, the presence of salt in crude oil with water causes the material to convert to acidic substances, especially chloride, which results in corrosion in the refinery. Therefore, it can be said that the presence of water in crude oil leads to problems such as increasing viscosity, corrosion of pipelines, increasing unusable waste, as well as storage and storage problems.

Emulsifiers that create this system are surface active agents in crude oil, especially petroleum resins and asphaltenes. Due to the high viscosity of the above-mentioned emulsions, pumping and handling of crude oil with salt and water will be difficult. Accordingly, it is necessary to break this emulsion before any movement and transfer is required. Accordingly, using a suspender material suitable for the type of crude oil, water and salt are separated from crude oil.

Using emulsifiers, the emulsion of oil-water can be degraded or unstable, thus generating two incompatible phases. In this case, the separation of water from oil becomes much easier. In general, three types of emulsions for crude oil – water can be considered:

The mechanism of the performance of demobilizers is to replace part of the surfactant and reduce the surface tension of the joint water-oil interface. Figure (1) shows the effect of a dimmolifier on the separation of water from a chemical sample. As it is shown in the figure, the two-phase interface diodes are fully characterized.

Figure (1): The effect of using a de-Emulsifier on water separation from emulsions