Oil refineries, which are the main centers of energy products in the country, use about 1% of refined oil as fuel. In a refinery where about 100,000 barrels of crude oil are refined daily, it is especially important to study the refinery’s energy consumption and find ways to save energy. In a refinery, in order to convert crude oil into different materials, it is necessary to go through a series of special processes, which are more efficient at high temperatures or do not occur at low temperatures.

That is why the furnace is one of the main parts in the refinery. About 75% of the energy from hydrocarbon fuels used in refineries is consumed in furnaces, so simulation and accurate design of furnaces is one of the most important steps in reducing the energy consumption of these industrial units.

Furnaces are among the equipment that play a major role in industry. Almost no industry can be found that does not use furnaces. The main parts of a furnace include the combustion chamber, the burners, the displacement part, the chimney, the auxiliary equipment for entering the air and fuel, as well as the measuring and control devices. Figure (1) shows a simple diagram of a furnace with its various parts. 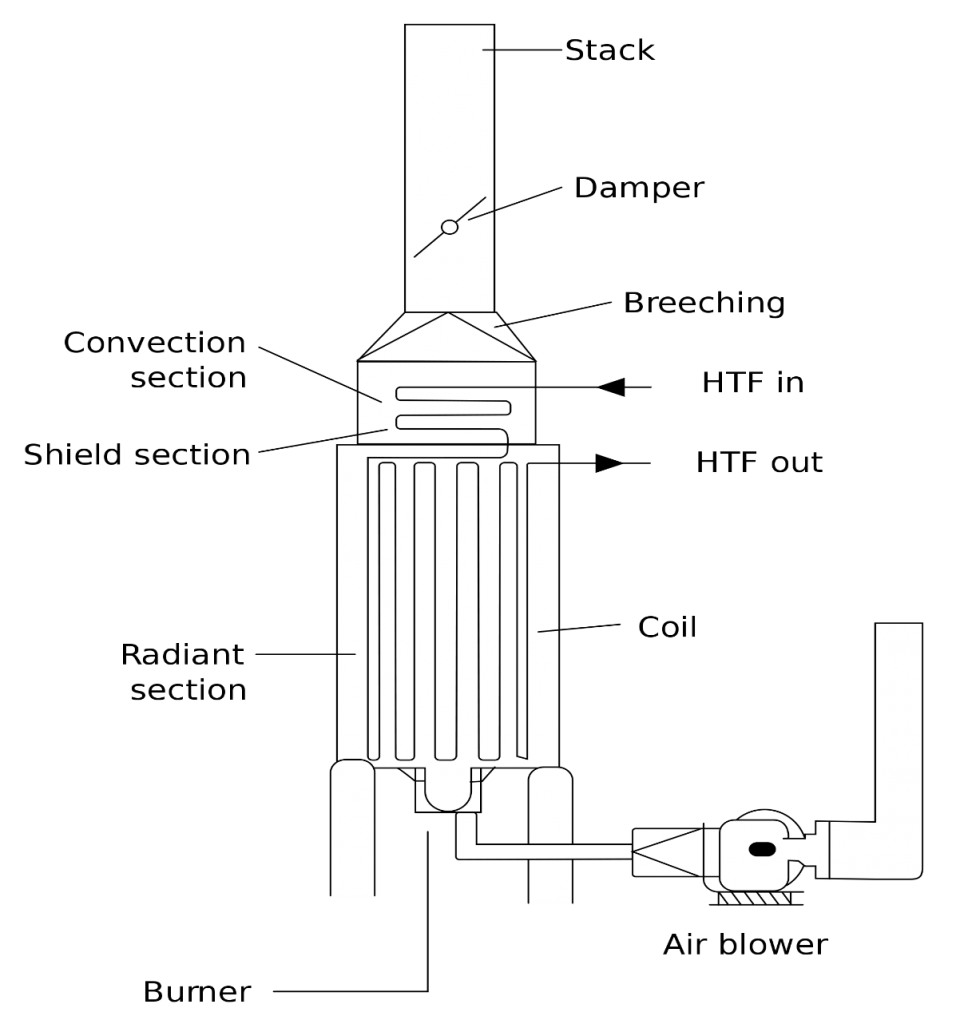 Combustion gases pass through the displacement section and enter the open air through the chimney. The main task of the furnace is to supply a certain amount of heat to the process fluid under high temperatures. The main cause of heat transfer is the radiation mechanism. If economically justified in a separate section, the heat of the combustion exhaust gases is transferred to the pipes in the form of displacement.

The development and completion of new furnace design methods stems from numerous practical experiences in the past. In the late nineteenth century, the first industrial furnace was built in the form of a boiler. The main problem of this furnace has been the inefficiency of high viscosity liquids and flammable materials. Process fluid in such boilers is subject to decomposition, excessive heat absorption, and coke formation, which can eventually lead to fire and other problems.

The next step in the development of furnaces were horizontal furnaces in the form of direct flame shells. Although the equipment used in such furnaces is safer than previous models, but due to disadvantages such as low heat transfer rate, low heat efficiency and discontinuous operation, they were not well received.

At the beginning of the 20th century, industries began to use continuous furnaces in which process fluid was expelled into tubes under direct heat. At the beginning of the production of this type of furnace, due to the lack of engineering knowledge in the field of preventing the formation of coke and salts on the wall of pipes, the temperature in certain parts of the pipe increased sharply and these hot spots led to cracks and fire.

The increasing need for more heat led to the separation of process fluid tubes from the heating zone using a retaining wall. As a result, the basic role of radiant heat was not given enough attention when designing furnaces, and in the original furnaces, only the heat transfer mechanism was used. Another disadvantage of such furnaces is the high percentage of excess air required in primary furnaces. In such a situation, not only would the thermal efficiency of the furnaces be reduced, but the cooling of the hot gases by large amounts of air would cause incomplete combustion.

In recent years, with the advancement of technology, furnaces are designed in such a way that the process fluid is directly exposed to the radiation of hot gases and the dominant mechanism of heat transfer in such furnaces is radiant heat transfer.

There are different criteria for classifying furnaces. These criteria include the following:

The most important division according to the method of supplying the required air is combustion and transfer of exhaust gases. Combustion gases have a lower density than the ambient air and therefore it is possible to induce combustion air into the furnace. Most furnaces are of the natural suction type, in which the chimney allows air to enter the combustion chamber and hot gases to escape. In forced suction furnaces, positive pressure is created by the ventilator, even in which case the combustion chamber and all other parts of the furnace operate under negative pressure and hot gases are released by the chimney.

Combustion has been one of the oldest and most important processes used by humans for centuries. As mentioned, today more than 90% of the world’s energy resources are supplied directly or indirectly by the combustion process. Combustion is a series of complex exothermic chemical reactions that occur between a fuel and an oxidizer and are accompanied by the production of heat or light in the form of melting and flame.

Combustion and Combustion Reaction Flows are present in many devices and equipment such as furnaces, combustion engines, gas turbines, missiles and household appliances. The rate of energy release due to the development of combustion reactions affects the amount and distribution of temperature at different points, and the temperature of each point affects the behavior of the flow, including the components of velocity, pressure and fluid characteristics at that point.

The rate at which chemical reactions progress and heat is released depends on the rate at which the fuel-oxidant combines, and the rate at which the fuel-oxidant combines depends on several factors, including how the fuel-air mixes, the concentration of the reactants, and the combustion chamber temperature. Among the mentioned factors, high temperature is of special importance because it is necessary for the production of radicals and direct combustion with atmospheric oxygen is a reaction caused by intermediate radicals.

In general, the combustion reaction of a fuel can be shown as follows: