In the preparation of base oil using the traditional method of solvent extraction using the separation of undesirable substances from vacuum distillation products, the base oil is produced, while in the production method using hydrogenation and hydrocracking processes, the chemical structure of oils is changed.

On the one hand, unstable compounds (sulfur, nitrogen, oxygen) are converted to stable compounds during the chemical process, and on the other hand, reactions such as saturation of aromatic compounds, opening of the ring of naphthenic compounds and isomerization of compounds that improve the quality of base oil are produced. . In the following, hydrocracking and hydrogenation reactions are investigated.

Hydrocracking of oil cuts has always been considered. In 1927, Farben used this process to convert lignite to gasoline. In 1930, Aso used this method to improve the quality of petroleum products. In recent years, the hydrocracking process has expanded rapidly for the following reasons.

The main feature of hydrocracking reactions is the breaking of the carbon-carbon bond. Depending on the status of this link, the reactions can be divided into three groups:

This reaction is the sum of two reactions of chain hydrocarbon cracking and hydrogen-derived olefin saturation: Figure (1) Reactions: (a) Desulfurization and (b) Nitrogenation in hydrogenation

Figure (2) shows the saturation reactions of polycyclic aromatic compounds, the opening of the ring of naphthenic compounds and isomerization along with the changes in the viscosity index and the pour point of the compounds before and after the reaction. 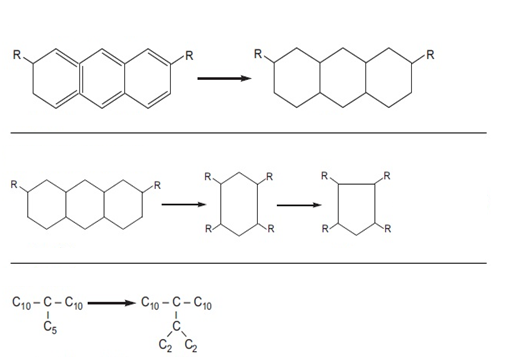