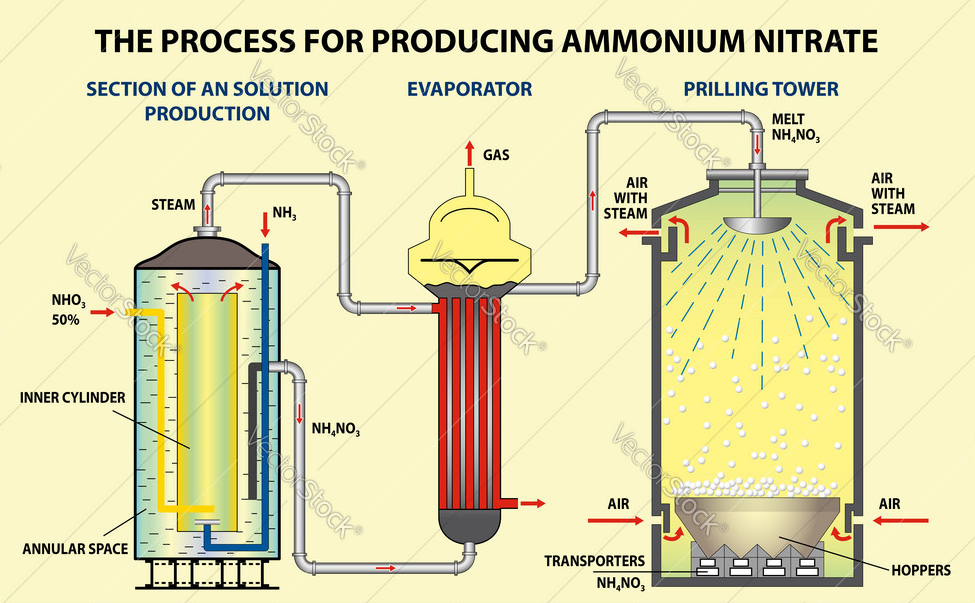 Ammonium nitrate, (NH4NO3), a salt of ammonia and nitric acid, used widely in fertilizers and explosives. The commercial grade contains about 33.5 percent nitrogen, all of which is in forms utilizable by plants; it is the most common nitrogenous component of artificial fertilizers. Ammonium nitrate also is employed to modify the detonation rate of other explosives, such as nitroglycerin in the so-called ammonia dynamites, or as an oxidizing agent in the ammonals, which are mixtures of ammonium nitrate and powdered aluminum. Figure (1) shows the chemical reaction between ammonia and nitric acid to produce ammonium nitrate.

Fig 1: The chemical reaction between ammonia and nitric acid to produce ammonium nitrate

By combining nitrogen in the air with hydrogen obtained by steam modification from coal or natural gas, ammonia became a massive chemical. Ammonia can then be oxidized to nitric acid by combining it with air on a hot platinum catalyst to burn it. In this way, ammonium nitrate is produced with the chemical formula NH4NO3. Hot ammonia and nitric acid combine in a neutralizing reaction.

After dehydration, the molten salt sinks into a spray tower, where the falling droplets are referred to as tablet-sized masses called cylindrical tablets. The density of the tablets produced can also be controlled. The denser material is used as fertilizer and the lighter and more porous material enters the explosives industry. Ammonium nitrate is a very strong moisture absorber, so it is placed on it when producing a moisture-proof coating. Figure (2) shows a simple diagram of the ammonium nitrate production process. The most important application of ammonium nitrate is its use in agricultural industries. The use of this fertilizer for pasture and grassland products, especially in European countries, is so common that about 37 million tons of this substance is produced and used annually in the world. Because plant roots are not able to absorb nitrogen directly through the soil, nitrate is an excellent source of plant nutrition.

Ammonium nitrate fertilizer is one of the oldest mass-produced nitrate fertilizers in the world. The granular form of this material has always been preferred by farmers due to its ease of transportation and handling. Other applications of this substance include the use in the production of dyes, pesticides, fireworks and oxidants.